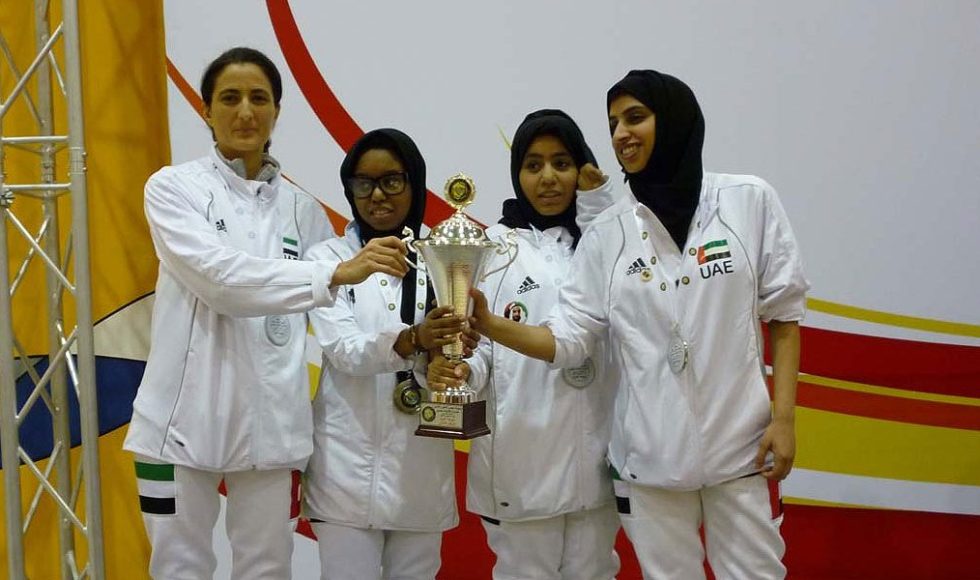 Dear Fencers, Dear Friends, we hope everyone is well.
We are proud to announce that our fencers Hala Belselah and Hamda Al Qubaisi represented UAE at the Second GCC Fencing Championship organised by the Bahrain Fencing Association.

Four countries from the Gulf region took part in this four-day event. Teams in the fray were Kuwait, the UAE, Qatar and hosts Bahrain, while Saudi Arabia and Oman were unable to form their teams ahead of the championship. The event was held under the patronage of Supreme Council for Youth and Sports vice-president and Bahrain Royal Equestrian and Endurance Federation president Shaikh Khalid bin Hamad Al Khalifa. The Higher Organising Committee was headed by Bahrain Fencing Association president Shaikh Ebrahim bin Salman Al Khalifa. Other high-ranking fencing officials from the GCC countries, including the UAE Fencing Federation President Sheikh Eng. Salem Al Qasimi, attended the event.

Hala Belselah took the bronze medal in the Individual Epee Open Women event. This is a brilliant achievement for UAE and especially for MK Fencing Academy. Hala played remarkably well her pool games and took top position at the table of direct elimination, but she had a difficult game during the semifinal.

With this remarkable result Hala has shown that Women fencing have future in UAE and started the beginning of many more medals for UAE. Well done Hala for your great achievement, we are all proud of you!

Both, Hala and Hamda also took part at the team event, where UAE took silver medal. This is the first time that UAE Women’s team is taking a medal in GCC events.
Once again well done and thank you to both Hala and Hamda for all their hard work and dedication to the programs of MK Fencing Academy, and good luck in the future events!
MKFA Team